If you are in a hurry, then click and buy our top choice, which is Ryzen 7 5800x 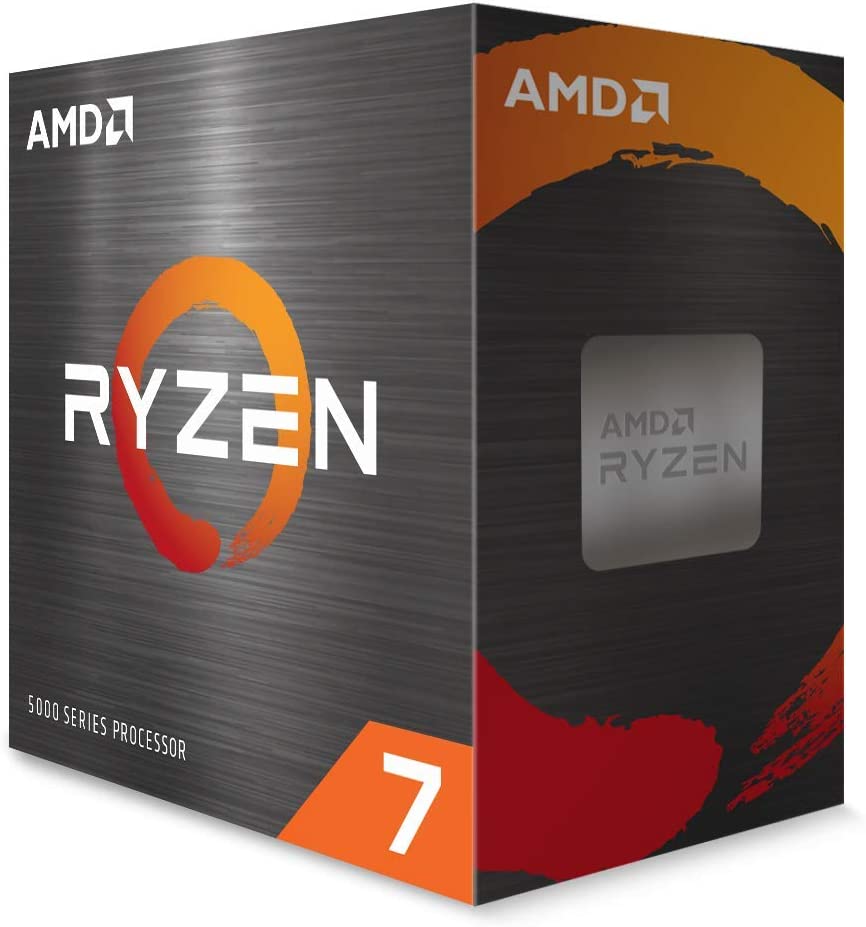 AMD has introduced their latest architectural improvement to Zen 2 technology, making it Zen3 the company’s biggest achievement in Desktop chips so far. Changes have been introduced to the previous Zen2 technology at both macro and micro levels.
These Ryzen-5000 processors also use the 7nm process but have a 19% boost up in IPC, a significant cut down in core-to-core latencies, and a unified chip design layout. Moreover, they have improved single-core performance, making them ideal for gaming, multi-tasking, and power use.
These improvements have helped them compete and outperform Intel’s most powerful gaming PCUs, which had been leading the industry for over a decade.

AMD Ryzen 9 5950x is the real deal-breaker, powered with Zen 3 architecture, 16-core, and 32 thread multi-core potential. It is an ultimate gaming CPU that has almost outperformed Intel’s dominance in the desktop CPU market and has successfully narrowed down the line between High-end Desktop (HEDT) and mainstream Desktop platforms.
The first and foremost thing about this game CPU is Zen 3 processors. AMD has already impressed with Zen and Zen 2 architecture, and now they have Zen 3 architecture, which has replaced Zen 2. There are macro and micro changes in the Zen 2 architecture to make it a Zen 3 CPU.

It has a 19% boost in IPC, which means it can outperform Core i9 comet lake processors with its highly boosted single-threaded performance. In addition to micro-level changes, there are macro-level changes in Zen architecture. For example, the CCX 4-core design features two 7nm Zen chipsets, each sharing 32 MB, l3 cache, for a total of 64 MB.

Another feature that helps it stand out as the best Zen 3 CPU for gaming is its reduction in core-to-core latency. The efficient and uninterrupted communication between core and cache will make a great difference in gaming performance.

16 cores and 32 threads make the Ryzen 5950x an ultimate choice for content creators and power users. Having so many cores and threads, you can expect an impressive multi-tasking performance by this CPU; it doesn’t matter how many tasks you are working on simultaneously.

Another impressive feature of the CPU is its compatibility with various motherboards-thanks to AM4 sockets. It is compatible with B350, B550, X570, X470, and B450. However, if we consider power consumption and thermal performance, the CPU works great with X570 motherboards.

Having a minimal core-to-core latency,7nm manufacturing process, base-clock of 4.3 GHz, and boost-clock 4.9 GHz, the CPU has managed to deliver an outstanding gaming performance. GPU is another critical factor for gaming performance.

It doesn’t come with an integrated GPU, and you can choose the one according to the screen resolution. NVIDIA GeForce RTX 3060 Ti makes a better choice for 1080p gaming. If you want to make it a 4K, you can go for Radeon RX 6900 or NVIDIA RTX 3080.

The TDP rating is 105W, which means the temperature is easily manageable. It would help if you paired it with an external cooler as it doesn’t include a cooling solution in the box.

Pros
Cons
It is an ultimate gaming CPU, having a boost up 4.9 GHz, ZEN 3 architecture, and AM4 socket platform. Moreover, with 16 core and 32 threads, the CPU is ideal for gamers, serious content creators, multi-taskers, and power users.

AMD Ryzen 5900X 2-AMD Ryzen 9 5900x is another outstanding gaming CPU built on Zen 3 architecture. With a huge IPC bost up for exceptional single-core performance and improved core-to-core latency, this is one of the most competitively priced mainstream gaming CPUs.

In AMD Ryzen Zen 3 series, it is the second most powerful gaming CPU after 5950x. The only advantage it gets over its big brother is the price. CCD layout of ZEN 3 architecture has significantly helped to boost gaming performance. In Zen 3 architecture, they have centralized 8 cores-CCX with a single CCD.

It means instead of two CCX per CCD, Zen 3 architecture features one CCX per CCD. This will reduce core-to-core latency, and each CCX will have complete access to the L3 32MB cache for a total of 64 MB. Moreover, AMD engineers claim to provide a 19% boost up in IPC (instruction per cycle), which helps it stand out as one of the most powerful gaming and multi-tasking CPUs.

Featuring an AM4 platform, the Ryzen 9 5900 is compatible with starting from X470 and B540 or above. However, all of you having X470 and B450 motherboards will be able to install them on this CPU after a BIOS update expected in 2021.

The processor has 12 cores and 24 threads, a base clock frequency of 3.7 GHz, and a boost clock frequency of 4.8 GHz. It is the ultimate choice for serious gamers who want a powerful gaming CPU under $900. Having a TDP rating of 105W, same as 5950x, it manages heat and power consumption very well.

As AMD is only concerned with a boost in performance, it may achieve the highest temperature up to 98 degrees celsius. However, in many independent tests, it reaches a maximum of 84 degrees celsius when paired with a cooler. Remember, the CPU doesn’t come with a built-in cooler, and you need to pair it with an external cooler.

Pros
Cons
If you are looking for a powerful mainstream gaming CPU under $900, then Ryzen 5900, with the Zen 3 platform, is the ultimate choice for you. Powered with Zen 3 architecture and a great boost to single-core performance, the CPU makes a real deal for serious content creators and power users to build their favorite power machines.

Having reviewed Ryzen 9 5950x, ND 5900X now, we will review another Ryzen 7 5800x, next on Zen-3 powered series. Powered with Zen 3 technology with a boosted single-core multi-thread performance, this is one of the best gaming CPUs under $600.

With the introduction 0f Zen-3 technology, AMD has successfully outperformed many of Intel’s gaming beasts. The major reason behind this is that we have not seen a zero percent boost in IPC in intel’s CPU for over a decade. On the other hand, there is a 19% boost in Instruction per Cycle, as AMD jumped from Ryzen 2 to Ryzen 3.

It features the same 7nm fabrication as its predecessors and higher members in the stack. It has a single CCX of eight cores with access to an L3 cache of 16 MB for a total of 32 MB. in Zen 3 architecture; each core has direct access to the L3 cache, which helps in cutting core-to-core latency.

Architectural improvement makes the CPU ideal for gaming and other multi-core performance. It means it has a half cache to Ryzen 9 models. Buy it if you have an X470 and B540 motherboard or above. However, you will use the CPU with late-model AMD-boards after the Q1 BIOS update expected in 2021.

Moreover, it has a TDP rating of 105 watts, the same as previously reviewed Ryzen 5000, Zen 3 processors. Powered by 8 cores and 16 threads with a base clock frequency of 3.8 GHz and a boost clock frequency of 4.8 GHz, the CPU promises impressive gaming and video editing performance.

The CPU has tested independently for thermal performance; it has performed impressively. With maximum clock boosts, it reached a maximum temperature of around 71 degrees celsius. Remember, it doesn’t include a cooler in the box, and you need to pair it with the best cooling solution for power use.

Pros
Cons
Powered with AMD’S ZEN 3 technology, the CPU promise the best single-core multi-thread performance for gaming and content creation.19% boost up in IPC, major cut down in core to core latency, and 32 MB L3 cache helps it stand out as the best Zen 3 gaming CPU under $600.

This dual-core layout results in increased travel time for gaming and other tasks. Unlike its predecessors based on Zen 2 architecture, it features a single-eight-core complex design. Moreover, AMD has cut down the core to core latency by providing each core direct access to the L3 cache memory.

In Ryzen 5 5600x, each core has excess to L3 16MB cache for a total of 32 MB. As far as gaming is concerned, Zen 3 technology has everything you want to have in your gaming CPU. For instance, there is a 19% boost in Instruction per Cycle, which helps it stand out as one of the most powerful gaming CPUs.

The most surprising feature of 5600x is its lowered TDP value. It has a low TDP rating of 65 W, but surprisingly, there is no significant drop in performance and output. Another feature that sets it apart from other Ryzen-5000 CPUs is its cooling solution. AMD Ryzen 5 5600x comes packed with a Wraith Spire cooler.

This is ideal for managing thermal loads during multi-thread workloads and makes the overall and affordable system, as you don’t need to spend extra bucks on the cooling system. Moreover, it also features an AM4 socket, which means it is compatible with old-model AMD boards.

You can also pair it with X470 and B540 and motherboards with a BIOS update. However, you will install lower model boards after the BIOS update that is expected in early 2021.

As we can see, AMD, with its newest Zen 3 technology, presents serious competition to Intel’s high-end gaming chips. All the 4 CPUs in the Ryzen-5000 series have improved single-core performance, boosted up IPC values, and excellent core design, making them an excellent choice for multi-tasking, gaming content creation. However, our top pick for the best Zen 3 gaming CPU is